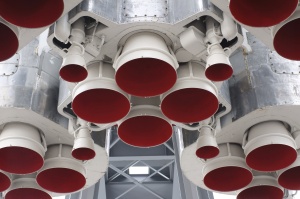 Back to the USSR: Stories from the Grassroots on Containing Russia’s Nuclear Firebirds

Today’s headline in Nature reads, “Western science severs ties with Russia.” I lived and worked in Russia at the time of the dissolution of the Soviet Union and through the turbulent decade of 1993-2003. 2014’s news stories create an interesting juxtaposition to my read of Glenn Schweitzer’s book on the International Science & Technology Center (ISTC), Containing Russia’s Nuclear Firebirds (2013, The University of Georgia Press).

Glenn chronicles the history of ISTC and related nonproliferation programs: an endeavor I was on the front lines of, for nearly fifteen years. I know Glenn, ISTC’s first Executive Director (1992-1994). Although we did not overlap during our tenure at the Center in Moscow, integration of former Soviet researchers into the international scientific community links us… even as the network we nurtured is being pruned due to Russia’s violation of international law in Ukraine.

Post-USSR Russia was a very different country in those days: in crisis but euphoric, spurred by hopes for democracy and entrepreneurial opportunity. For me as an American in the ‘trenches,’ there was a sense of optimism. An individual could have a meaningful impact on innovation-driven prosperity, engendering world peace. Social enterprise was not a ‘thing,’ yet. But I argue that delivering a peace dividend can be part of the triple bottom line. Sustainable, security impacts are a social benefit; a merit good on the spectrum of social impactfulness.

What is the International Science & Technology Center?

ISTC is an intergovernmental organization. It was established as a vehicle for engagement of weapons of mass destruction scientists and engineers in peaceful, civilian endeavors. The concern was that un- and under-employed WMD developers represented a proliferation risk; that they could share their WMD expertise with rogue states or groups. Boiling it down, the Center’s core business was funding and managing research projects to provide opportunities for researchers in the former Soviet Union to redirect their talents and skills.

That’s where I came in. I was brought into ISTC in the early days to work on the start-up of ISTC’s industry partnership, technology transfer and entrepreneurship program. Those are mechanisms for research to be translated into economic development outcomes. As the first tranche of research projects funded in the early 1990’s came to a close, how were the results to be leveraged, to ensure sustainable outcomes for R&D personnel?

Containing Russia’s Nuclear Firebirds does a great job at tracing the ever-changing, policy-level attitudes and the evolution of the Center. Glenn talks a lot about how there was a huge gap in linking research to economic development outcomes. I was dead center in that space, where the rubber meets the road. At the same time, I feel Glenn didn’t go quite far enough telling the stories of some great successes, where innovators and entrepreneurs got traction.

A Startup Success Story out of a Closed Nuclear City

One startup I enabled, spun-out of the applied mathematics laboratories of the All-Russian Institute of Technical Physics (VNIITF, Snezhinsk / Chelyabinsk-70) – sort of a Soviet Los Alamos. The founders were formerly engaged in modeling underground nuclear test data. This is a good example, because it brought together the threads of my core competencies in industry research collaboration, tech transfer and entrepreneurship.

While still at VNIITF, the team came together to develop solvers for modeling fluid flow through porous media for a major multinational corporation – a deal that we brokered at ISTC. The intellectual property terms we negotiated, allowing for retention of rights outside of the field of use of the sponsoring company. This concession enabled the establishment of a new venture. A tech entrepreneur and angel investor invested and brought the venture into to Neurok family of companies, and I networked the aspiring CEO into other multinational companies looking for similar solutions.

The team initially set-up shop as NeurokTechSoft in Troitsk, a suburb of Moscow, but later moved the heart of its operations to Alpharetta, Georgia as NeurokSoftware. They retained TechSoft as an R&D affiliate in Russia. The company continues to thrive, developing solvers for major companies and research institutes (CERN, etc.), launching new products and services, and creating new high-tech jobs.

Over my 5+ years at ISTC in Moscow, I met with hundreds of researchers and tens of entrepreneurs, partnering with them to move promising technologies and related capabilities from lab to market. It was the privilege of a lifetime.

In this world of increasing interconnectivity, both the benefits and dangers of technology are amplified. I still have to question the wisdom of severing research ties with Russia.